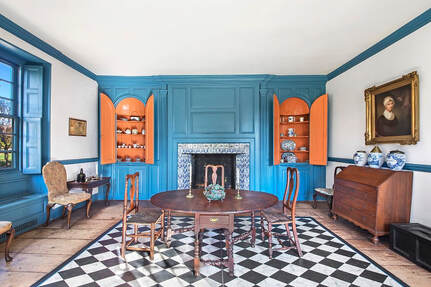 This less-formal parlor would have hosted family meals and casual gatherings. The bright orange and blue paneling is the exact color of the room at the end of the 18th century as determined by microscopic paint analysis.  In this less-important room, decoration was achieved with color rather than expensive carving, as in the East Parlor.

The works of the Dutch tall case clock was made in Amsterdam c. 1680 by the clock maker M. Buys.  The case may not be the original housing for the clockworks.  Most often referred to as a "grandfather clock", this term did not come into popular use until late in the 19th century. These clocks were previously called either "standing clocks," "tall-case clocks," or "hall clocks." But in 1876, a man named Henry Work wrote a song called "Grandfather's Clock”, which was one of the most popular songs of the day.

This clock was designed with a number of special features including windows indicating the day of the week, the month, and the phase of the moon.  The clock also brings life to the house with its comforting ticking and the cheerful songs played on the hour and half-hour.  The clock’s movement includes a series of carefully crafted brass bells which are struck by tiny hammers to play each set of tunes.  The sounds made by the clock are in a code which indicates to listeners the time in 15 minute intervals.  For example between the hours of 1:00 and 2:00 the clock will strike in the following pattern:  as the hands reach 1:00 o’clock a long song will play followed by 1 ding to indicate the hour;  at 1:15 the clock dings one slightly quieter ding; at 1:30 the clock plays a shorter song followed by 2 dongs indicating that it is 1:30 going on 2:00 just in case the listener couldn’t tell if the song was a long or short song;  and finally at 1:45 the clock dings one slightly quieter dong. There are 6 different sets of songs that can be changed by the clock keeper.  When the clock is in running order, we change the tunes at random intervals, so you never know which ones you will hear.

Across the room you will see a desk with 3 large Delft tobacco jars.  Each is labeled to identify what was once held inside the jar.  No 12 would have been a special blend sold only by the tobacconist who once owned the jar.  Rappe (French râpé, “grated”) is the name given to a coarse, pungent snuff made from dark tobacco.  Rappe snuff was so coarse that people who preferred it had to carry graters with them to turn it into a fine enough powder to use.  Sto. Domingo indicates tobacco that had been grown in Santo Domingo on the island of Hispanola which was known as a source of fine tobacco in the 18th century.