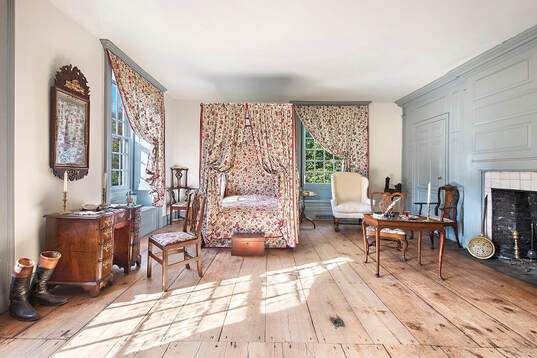 This bedchamber, the “best” bedchamber, is the one most likely used by George Washington on his various visits to Van Cortlandt House.   Keep in mind, though, that the furnishing and decorations in the room were not here during Washington’s time.  The furnishings in this room, and throughout the house, were collected for the museum based on the choices that would have been available to a family such as the Van Cortlandts in the second half of the 18th century and the early years of the 19th century. Furnishings which were known to have been in Van Cortlandt House or were once owned by a member of the family are pointed out in this guidebook.

The West Chamber is furnished with matching bed and window hangings in what is known as a “drapery” style.  This style allowed for the curtains at the windows to be drawn up to allow light into the room during the day as needed.  The bed was also hung with curtains that could be raised or lowered to help keep the sleeper warmer in winter or for more privacy.  While earlier versions of bed hangings were often made of wool or silk, these fabrics were not washable and were often prone to infestations of fleas and bed bugs.  By the 18th century bed curtains of wool and silk were replaced with cotton or linen fabrics which could be washed periodically.  The hangings in the West Chamber are made of fabric known as chintz which is cotton printed by hand and finished with a light shiny glaze or polish.  The pattern of these hangings is from the archives of the Dutch East India Company which was one of the major importers of printed textiles to Europe in the 18th century.

The mahogany knee-hole dressing table, c. 1770, located beneath the mirror descended in the Van Cortlandt Family.  It was made in Massachusetts.
The burl walnut chest of drawers to the left of the door is English, c. 1725.  It is said to have belonged to Mary Van Cortlandt Horne, a daughter of Frederick Van Cortlandt, who built the house.