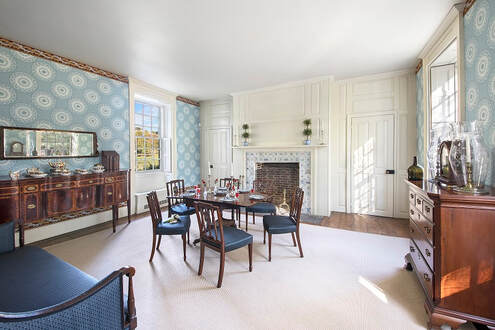 After extensive research and painstaking restoration, the Dining Room has been brought back to how it appeared during the ownership of the house by Augustus Van Cortlandt (1728 – 1823) the youngest son of Frederick and Frances Jay who was the third owner.  Augustus inherited the house upon the death of his older brother James in 1781.

The room as it is seen today represents the height of post-Revolutionary War Federal elegance.  The side wall and border papers, found preserved beneath later wall finishes, is a copy of the original French paper manufactured by the firm Jacquemart y Benard c. 1820.  The earliest wallpaper discovered during the exploratory phase of the restoration project was dated c. 1750 based on George II tax stamps found on the back of the paper.  The other major changes to the architectural finishes of the room were removal of the c. 1840 Greek Revival plaster molding and a mantel that research indicated was not original to the room but was given to the National Society of Colonial Dames in the State of New York in 1896.  These features were removed because remnants of the original crown molding and fireplace wall paneling were discovered during restoration of the room. The crown molding was recreated as was two-thirds of the fireplace wall paneling.  The original paneling is the section to the left of the mantel.  You may also notice there is a small area where the ceiling is higher. This shows the original ceiling height.  During the c. 1840 renovations to the room, the ceiling was lowered to help visually minimize an east to west slope that developed over the years as the house settled.  To restore the entire ceiling to the original height proved to be too great a challenge so the decision was made to show it in this one corner which also revealed the full height of the original paneling.

Furnishings in the Dining Room have also been reinterpreted to represent those which may have been used in the room during Augustus’ ownership.  Some of these furnishings, Van Cortlandt family objects, were used in the previous interpretation of the Dining Room.  The tall chest of drawers between the windows to the right of the room and the knife boxes on the side board are both Van Cortlandt family objects.  The table, four of the chairs, and the settee were formerly in storage at the Headquarters of The National Society of Colonial Dames in the State of New York, quietly waiting restoration and a return to useful life at Van Cortlandt House.  The other two chairs were purchased at auction to match.  These pieces have all been upholstered in horsehair, a very common textile used on seat furniture in the 18th and 19th centuries.  ​