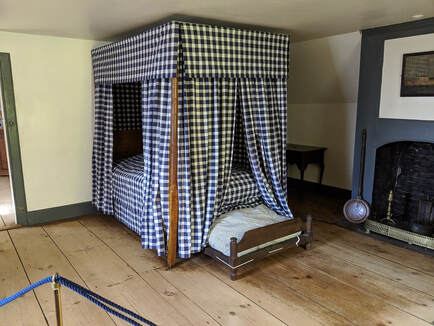 For many years it was felt that the nursery had seen the least number of alterations since the house was built in 1748. In the winter of 2001, a closer examination of the room raised many questions surrounding its history.  With little evidence beyond the existing wall surfaces, which may date to as late as the early 20th century, these questions may never be answered.  The present paint colors were determined through microscopic analysis at several key points in the room.  The wood trim exhibited a variety of paint layers with the oldest being the dark blue gray. With few clues as to how or even if the Van Cortlandt family used this space, it was decided to retain the long-standing interpretation of this room as a nursery.

In the 18th century, children seldom participated in the social world of adults.  Instead, children were relegated to a room such as this which was used as a sleeping chamber, a playroom, and a schoolroom. It is likely that the children ate many meals in the nursery or in the kitchen and did not join their elders in the dining room downstairs.  It is unlikely that this room was ever used as a nursery by the Van Cortlandt family because the youngest children to have lived in the house as their primary residence were Anna Maria and Eve who were 14 and 13 when they moved into the house.  They would have shared the second-best bedroom, the East Chamber on the second floor.