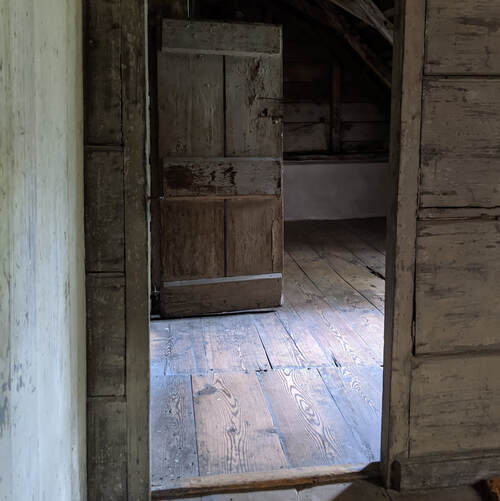 ​These attic rooms were studied by Dr. Bernard Herman of the University of Delaware in his examination and analysis of the house in February of 1994.  The ell attic offers some of the most interesting insights into the social history of Van Cortlandt house.  The unheated garret rooms with their board walls and original doors are built using wrought nails, a sign of mid-18th century construction.   The plan of the north attic and the size of the individual rooms supports the idea that this space provided quarters for household servants.  The practice of housing servants in unheated rooms tucked away in garrets is well documented in eighteenth and nineteenth-century houses throughout the region of the middle colonies including New York.  The presence of such rooms in the Van Cortlandt House is significant not only for what they tell us about historic living conditions and differing lifestyles under a single roof but also for their remarkable state of preservation.

The room interpreted as slave quarters is adjacent to the back or service stairs from the second to attic floors in the Dining Room wing.  The room is sparse with no decorative finishes, no heat, and no light other than what comes in through the door when it is open.  There are two sets of broad shelves along the north and south walls which were most likely used as sleeping bunks.  A third narrower shelf along the north wall may have been used by the occupants of the room for storing a few personal items.  The beds are made with linen ticking mattresses stuffed with paper to simulate corn husks, a single coarse linen sheet, and a single wool blanket.  Personal possessions include a madder red and indigo blue woolen Romal kerchief that would have been used either as a head wrap or folded into a triangle and worn over the shoulders to cover the bosom and a small strand of chevron glass African trade beads.  A bunch of dried lavender has also been hung in the room as insect repellant and to help freshen the air of the windowless room.

Although we do not know which of the enslaved people owned by the Van Cortlandt family would have used this room as their sleeping quarters, it can be assumed that it was used by enslaved females working in the house although not the cook.  It was most common for the cook to have slept in the kitchen which was originally in a separate building more or less where the Caretaker’s Cottage is located today.

Enslaved People Who Worked and Lived on the Van Cortlandt Plantation

Other than this list of names, there is nothing more in the census to tell us the specific work these enslaved people did on the plantation.

In addition to the enslaved people listed in the census as residents on the Van Cortlandt Plantation in Kingsbridge, Jacobus Van Cortlandt also owned Andrew Saxton who may have been a worker on the Yonkers plantation or at his brewery in New Amsterdam.  Saxton ran away from Jacobus in August of 1733.  A month later, having not returned on his own, Jacobus placed an advertisement for Andrew Saxton in the New York Gazette on September 17th, 1733. 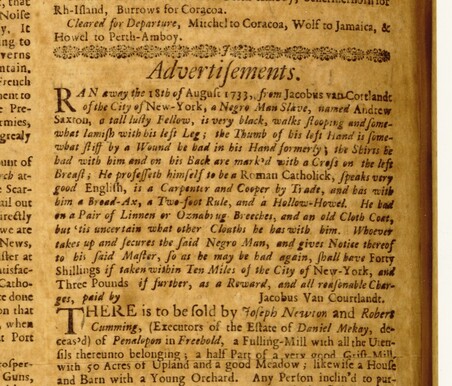 “Ran away the 18th of August 1733, from Jacobus Van Cortlandt of the City of New York, a Negro Man Slave, named Andrew Saxton, a tall lusty Fellow, is very black, walks slooping and somewhat lamish with his left Leg; the Thumb of his left hand is somewhat still by a Wound he had in his Hand formerly; the shirts he had with him and on his Back are mark’d with a Cross on the left Breast; He professeth himself to be a Roman Catholick, speaks very good English, is a Carpenter and Cooper by Trade, and has with him a Broad-Ax, a Two-foot Rule, and a Hollow-Howel.  He had on a Pair of Linnen or Oznabrug Breeches, and an old Cloth coat, but ‘tis uncertain what other Cloughs he has with him.  Whoever takes up and secures the Said Negro Man, and gives Notice thereof to his Said Master, So as he may be had again, shall have Forty Shillings if taken within Ten Miles of the City of New York, and Three Pounds if further, as a Reward, and all reasonable Charges, paid by  Jacobus Van Cortlandt.”
​

Six years later, in 1739, Jacobus Van Cortlandt died in Bergen County, New Jersey.  In his will he lists the following enslaved persons.  Jacobus’ only son Frederick inherited the plantation upon his father’s death.  He and his family; wife Francis; sons James, Frederick, and Augustus; and daughters Anne and Eve, were documented as living on the plantation by 1748.  In his will Frederick notes “I am now about finishing a large stone dwelling House on the Plantation on which I now live”.  This house, present day Van Cortlandt House, was not finished before Frederick died in early 1749 so it passed to his eldest son James with a provision that his wife, Francis, may live in the house for the rest of her life or until she remarries.  His young sisters Anne 14, and Eva 13 were also granted the right to live in the house until they married. Also listed in Frederick’s will are enslaved people, one or more he may have inherited from his father.