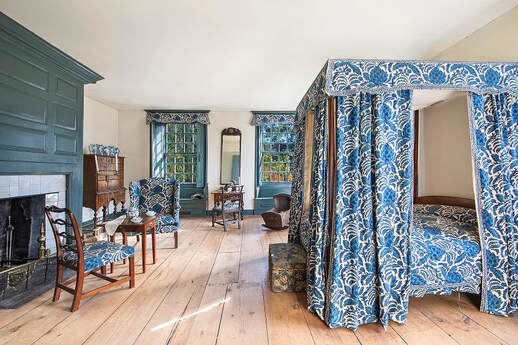 In the 18th century, celebrations and social gatherings, such as a ball or dance, frequently lasted for more than a single evening. Because of the great difficulty with travel, party guests would have been offered lodging with the host. When offered lodging, most guests, whether due to distance traveled or reluctance to leave a festive party, accepted the invitation to spend the night. The East Chamber has been made ready for visiting guests who have traveled to Van Cortlandt House with an infant child.

The East Chamber is “furnished” or hung with bed and window curtains made from a reproduction of an English, wax resist-dyed fabric which many Colonial New Yorkers used in their homes.  This style of upholstering a room matching fabric is called “en suite” with furniture and curtains created from or covered in a single fabric. This style was very popular in the 18th century.  An elaborate display of imported fabric such as this was possible only in the home of a wealthy family.

The William and Mary chest of drawers, in the far corner, and matching dressing table, between the windows, were both made in New England c. 1710.  A looking glass usually hung over a dressing table where men and women sat to apply make-up and groom themselves for appearances in polite society.

Very little is known about the dollhouse before it was given to Caroline Homans Patterson in 1847.  Had it been made for the original Caroline Homans?  Had she inherited it from her mother or perhaps an aunt?  We simply do not know.  What we do understand about the house is that it was made at a time when only the wealthiest of families could afford the luxury of such an elaborate toy.

Caroline’s Grandfather, John Homans, came to the Colonies from Kent, England sometime before 1725 settling in Rhode Island near Bristol and had a successful career as a ship’s captain.  His first marriage to Hannah Osborne ended childless with her death in 1747. His second marriage to Rebecca Gray took place on November 28, 1748 in Bristol, Rhode Island. Sometime after their marriage John and Rebecca moved to Dorchester Massachusetts.  Their first child, John, lived less than a year.  Their second child, a boy also named John, was born in 1753.  Both mother and son had their portraits painted by Joseph Badger in about 1755, a sign of the status and wealth achieved by Captain Homans. John Homans, II, one of 11 children born to John and Rebecca Homans, was the father of John Homans, III.  He married Caroline Walker on June 6, 1816.  Their daughter, Caroline Homans born in 1818, was the childhood playmate of Mary Mansfield.  Caroline’s brother, John IV, gave the dollhouse to Caroline Homans Mansfield, his sister’s namesake, and daughter of her childhood friend Mary Mansfield.

The other mystery surrounding the house are the dates 1744 and 1774 which are painted on the side rails of one side of the house.  These dates do not correspond to any births, deaths, or marriages associated with the Homans family that have been found to date.  Research into the history of the Dollhouse and the Homans family will continue in the hopes that we can find more to the story of this charming piece of the Museum’s collection.