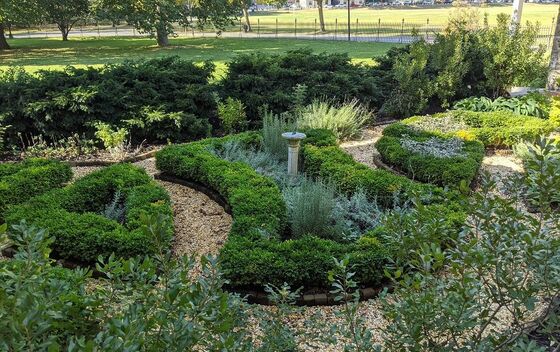 All of the plants in the Colonial Revival Herb Garden were grown and used in the New York area in the 18th century.  Most households kept a small kitchen garden with herbs, vegetables, and flowers for use in the home.  The herbs were used for seasoning food and for medicinal purposes.  This formal knot garden with miniature boxwood shrubs forming planting beds was installed in the 20th century as a display garden for plans which were known to have been used during the Colonial period.

Sage - salvia officinalis Sage is aromatic evergreen shrub-like plant most often associated with the preparation of poultry such as turkey and chicken. Sage leaf has a strong taste that increases when dried. Used sparingly to flavor and aid the digestion of fatty meats, it combines well with strongly flavored foods.  Sage leaf tea is an antiseptic nerve and blood tonic.  Fresh leaves can be rubbed over teeth to whiten them.  The current variety of sage growing in the Herb Garden has variegated or multi-colored leaves in green, creamy white, and rosy pink.

Lavender - Lavandula angustifolia Lavender has many useful attributes including both culinary and medicinal uses.  The flowers are known to flavor jams, vinegar, sweets, and cream.  As well as being crystallized for decoration.  Lavender flower water is used as a skin toner and an antiseptic.  Flower tea is used to treat anxiety headaches, flatulence, nausea, dizziness, and halitosis.  The essential oil of lavender is also used as an antiseptic as well as having sedative and painkilling properties.

Other herbs in this garden and the planting bed along the driveway just outside the Herb Garden include: