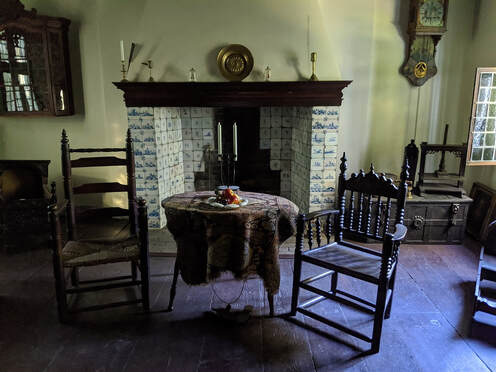 This room is a representation of a 17th century dwelling in New Amsterdam, the Dutch colony established on Manhattan Island.  The room was created in 1918 by The National Society of Colonial Dames in the State of New York from what was originally a 3rd bed chamber.

An all-purpose chamber such as this provided cooking, eating, and sleeping space for a middle-class family.  The traditional Dutch nook bed kept parents snug in the top compartment and children warm below by keeping body heat inside. If you’re feeling adventurous, you are welcome to crawl inside the lower compartment to see what it was like to sleep in such close quarters.  Some may find it to be a cozy space while others may feel too closed in for comfort.

●          The painted kast, or cabinet was made in the Hudson River Valley c.1700.  Only 6 of these painted kasten (plural of kast) are known and each was made for a family of Dutch descent.  A similar kast is on exhibition at the Metropolitan Museum of Art in New York.  Kasten were used to store linens and valuable textiles.
●          Painted pine bed steps were made in Hindelopen, Holland in the 18th century.
●          The painted “priksled” owned by Jacob Hop was used by the child on ice and snow and propelled with short poles resembling ski poles.
©Van Cortlandt House Museum /NSCDNY   718-543-3344  Contact ﻿Us ​