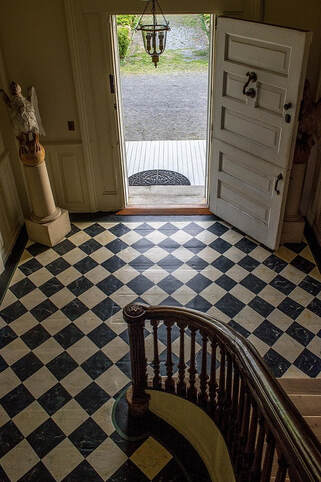 ​Your visit today brings you into Van Cortlandt House through the back door.  This doorway probably did not exist in Frederick Van Cortlandt’s original plan for Van Cortlandt House.   It was introduced while the house was being finished after Frederick’s death.  His oldest son James had to quickly alter the original design to be able to make space for him and his wife Elizabeth Cuyler, his two teenaged sisters Anna Maria and Eve, and their mother Frances Jay who was granted the right to live in the house for the rest of her life or until she remarried.   James added a 3-story addition creating an l-shaped plan for Van Cortlandt House.  This made the main hallway and the back hallway intersect where you have entered the house today.  The new back hallway provided both a private entrance for his mother to use while she lived in Van Cortlandt House, it also created a service staircase which allowed enslaved people and later servants to pass through the house as they worked.  Frances Van Cortland ended up living in the house until her death at age 79 in August of 1780 just a few months shy of James’ death at age 54 in April of 1781.

The spacious main entrance hall of Van Cortlandt House served as both a passageway and as a waiting area.  The soaring height of the staircase brightly lit with windows on all three floors, signaled the family’s social status and wealth showing an ability to spend money on a staircase that, in more modest Colonial-era houses would have been more useful and less beautiful.  You will exit the house later down the back staircase.  As you come down this staircase, watching that you do not hit your head, compare it to your experience going up the main staircase.

The original wide yellow pine floorboards in the entrance hall are protected by a painted floor cloth.  These cloths are made of canvas painted with several layers of paint to make them stiff and durable.  This is a reproduction hand-painted floorcloth installed in 2014.  A full-size custom template was made from a large roll of brown paper which was then transferred to canvas.  This allowed for a fully wall-to-wall floorcloth that follows the curve of the staircase.