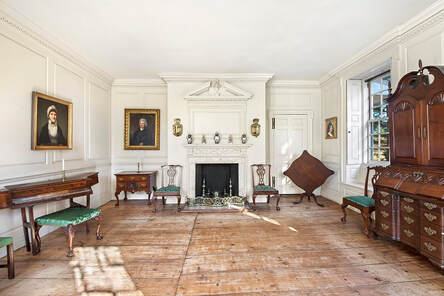 The most formal room in Van Cortlandt House, the East Parlor would have been the scene of the family’s most festive and special entertaining.   The highly carved mantelpiece, c. 1760, is the work of two anonymous New York carvers who may have apprenticed or worked as journeymen in London.   This decoration is believed to have been added by James Van Cortlandt, around the time of his marriage to Elizabeth Cuyler of Albany, New York.   The remodeling was carried out in the very fashionable rococo style with ornate carving surrounding the fireplace.

As the scene for various types of entertainments, the East Parlor would have been filled with beautiful yet versatile furniture. When not in use, card tables and tea tables fold up for placement against the walls, leaving the center of the room open for large gatherings such as a dance.

The portrait to the left of the fireplace is of the third owner of the house, Augusts Van Cortlandt (1728-1823), painted by John Wesley Jarvis, in about1810.

The table beneath the large gilt mirror is a recent gift to Van Cortlandt House Museum.  It is a five-legged mahogany card table made in New York c. 1760 and is unusual in that it has 5 legs rather than the 4 usually found on folding card tables.  It is this 5th leg that indicates to curators and collectors of antique furniture that the table was indeed made in New York.  A gift of Mr. William H. Savage in loving memory of Carolyn Mackie Savage and Carolyn Van Cortlandt Martin, the table has been passed down through several generations of the Van Cortlandt family.