The History of Enslaved People on the Van Cortlandt Plantation

Please note that research continues in the history of enslaved people on the Van Cortlandt Plantation.  We hope you'll visit this page again to discover what more we have learned.

The story of the Van Cortlandt family in America begins in 1638 when Oloff Stevense Van Cortlandt arrived in New Amsterdam from Holland. Oloff was an employee and officer of the Dutch West India Company.   Oloff was eventually considered one of the wealthiest men in New York having made his money as a merchant, brewer, money lender, and shipping. Near the end of the 17th century, Jacobus, the youngest of Oloff’s seven children, made his first purchase of land of what would eventually become a large and profitable wheat plantation.  While Jacobus may not have lived on his plantation, he did have enslaved people (both Africans and Native Americans) working here growing wheat, making improvements to the land, building barns, two mills, and building the dam that turned Tibbett’s Brook into a lake.

The first record of enslaved people living and working on the Van Cortlandt’s plantation occurs during Jacobus’ ownership.  The 1698 Census of Fordham and Adjacent Places lists enslaved people owned by Jacobus living and working on his land.   Fordham was, at the time, a village in Westchester County.  Adjacent Places included Lower or Little Yonkers, the plantation of Augustus Van Cortlandt.   The neighborhood now known as Kingsbridge wasn't given that name until much later after the King's Bridge was built connecting Manhattan Island to Lower Yonkers.

Other than this list of names, there is no further information in the census to tell us the specific work these enslaved people did on the plantation.

In addition to the enslaved people listed in the census as residents on the Van Cortlandt Plantation in Kingsbridge, Jacobus Van Cortlandt also owned Andrew Saxton who may have been a worker on the Yonkers plantation or at his brewery in New Amsterdam.  Saxton ran away from Jacobus in August of 1733.  A month later, having not returned on his own, Jacobus placed an advertisement for Andrew Saxton in the New York Gazette on September 17th, 1733. (See below.)

“Ran away the 18th of August 1733, from Jacobus van   Cortlandt of the City of New York, a Negro Man Slave, named     Andrew Saxton, a tall lusty Fellow, is very black, walks slooping and somewhat lamish with his left Leg; the Thumb of   his left hand is somewhat still by a Wound he had in his Hand   formerly; the shirts he had with him and on his Back are mark’d  with a Cross on the left Breast; He professeth himself to be a    Roman Catholick, speaks very good English, is a Carpenter and  Cooper by Trade, and has with him a Broad-Ax, a Two-foot   Rule, and a Hollow-Howel.  He had on a Pair of Linnen or  Oznabrug Breeches, and an old Cloth coat, but ‘tis uncertain  what other Cloughs he has with him.  Whoever takes up and secures the Said Negro Man, and gives Notice thereof to his Said Master, So as he may be had again, shall have Forty Shillings if taken within Ten Miles of the City of New York, and Three Pounds if further, as a Reward, and all reasonable Charges, paid by Jacobus Van Cortlandt.”

Six years later, in 1739, Jacobus Van Cortlandt died in Bergen County, New Jersey.  In his will he lists the following enslaved persons.
Jacobus’ only son Frederick inherited the plantation upon his father’s death.  He and his family; wife Francis; sons James, Frederick, and Augustus; and daughters Anne and Eve, were documented as living on the plantation by 1748.  In his will Frederick notes “I am now about finishing a large stone dwelling House on the Plantation on which I now live”.  This house, present day Van Cortlandt House, was not finished before Frederick died in early 1749 so it passed to his eldest son James with a provision that his wife, Francis, may live in the house for the rest of her life or until she remarries.  His young sisters Anne 14, and Eva 13 were also granted the right to live in the house until they married. Also listed in Frederick’s will are enslaved people, one or more he may have inherited from his father.

The enslaved people listed in Frederick’s will are:
James Van Cortlandt not only inherited an unfinished house; he also inherited the successful provisioning plantation established by his grandfather Jacobus. In order to continue operation of the plantation and mills. James, as had his grandfather and father, relied on the labor of enslaved people.  In addition to overseeing the operation of his plantation and milling operations, James continued his family’s involvement in government.  He served at various times as Supervisor of the Precinct of Yonkers and as its Commissioner of Highways. During the Revolutionary War, James served as a member of the Committee of Safety and the Westchester County Militia.   He died in 1781 leaving his property to be divided equally between this brothers Augustus and Frederick and his sisters Anne Van Cortlandt Van Horne and Eve Van Cortlandt White.  James’ wife Elizabeth was left his house and lot and water lot west of Broadway in Manhattan for her use for the remainder of her life.  James’ will does not list any enslaved people although it is impossible for there not to have been any living and working on the plantation.  James’ will was written on March 23, 1781, just 8 days before his death.

Before inheriting his family’s, plantation Augustus Van Cortlandt lived in lower Manhattan.  He had studied law under his Uncle John Chambers and was admitted to the bar. Augustus held the important position of Common Clerk of the City of New York between 1751 and 1783, a period of 32 years. It was in this capacity that Augustus, in the summer of 1775, received a request from the New York Provincial Congress to safeguard the public records of the City of New York due to the “alarming state of public affairs”.  As an employee of the British government, Augustus must have felt conflicted about this request.  Augustus first hid the records in a cellar under the garden of his city residence near 11 Broadway, but later transferred the records to the family’s plantation, then owned by his brother James. To make this potentially risky move less suspicious, Augustus made the trip to his brother James’ Lower Yonkers plantation with the excuse of paying a visit to his elderly mother.    The records were hidden in the burial vault established under the terms of their father Frederick Van Cortlandt’s will.  The city records remained on the plantation until 1784 when Augustus was ordered to turn them over to the newly appointed clerk of the City and County of New York.
In addition to Claus, the negro boy, inherited from his father Frederick, Augustus was likely to have inherited the enslaved people living and working on the plantation from his brother James.   Frederick had also inherited two enslaved people from his Aunt Anne Van Cortlandt Chambers in 1774.  They were a Negro wench Dinah, and Robbins.
During the Revolutionary War, the House and plantation were considered neutral ground with George Washington and British and Hessian officers using it as a temporary Headquarters.  In November of 1783 Washington returned to Van Cortlandt House where he stayed the night, before starting his march into New York for the formal hand-over from the British as troops, Loyalist refugees, and emancipated enslaved people left Manhattan. 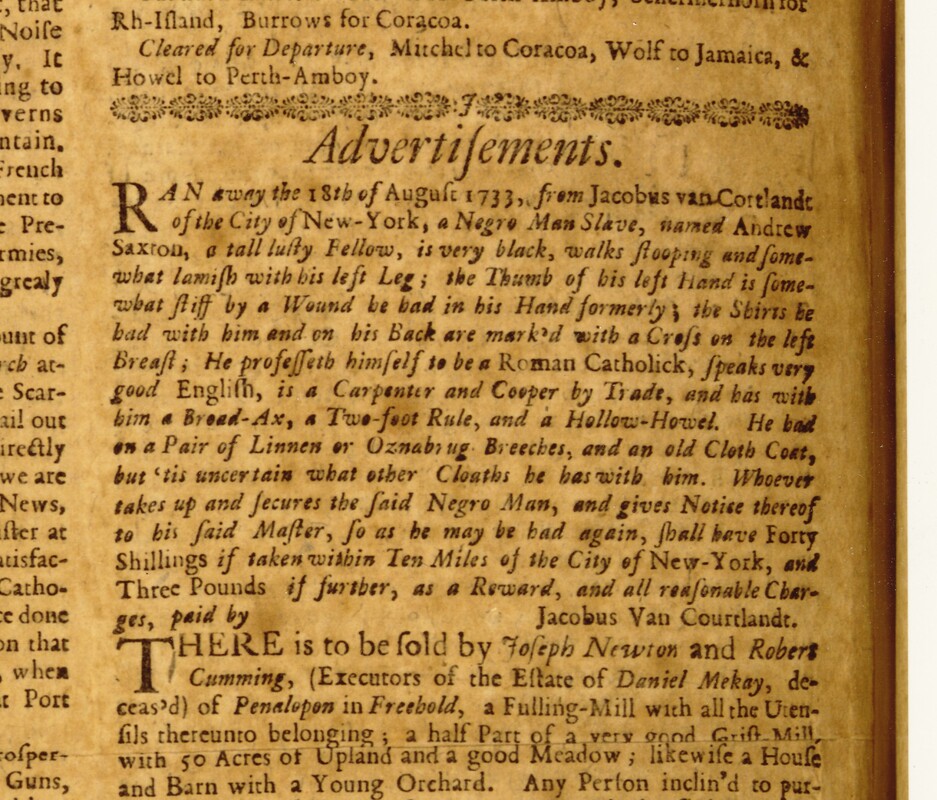 New York Gazette on September 17th, 1733 from the collection of the New-York Historical Society.